You’ve just bought your first brisket. Hopefully, you’ve learnt the ropes of barbecue and you know how to prepare it. But what part of the cow is brisket?

Contents show
1 What Part Of The Cow Is Brisket From?
2 What Is Brisket?
3 What Are The Names For Parts Of The Brisket?
4 Why Is Brisket Great For Smoking?
5 What To Look Out For When Buying A Brisket?
6 Final Thoughts

Brisket is a wonderful cut of beef. It’s also one of the most popular cuts for smoking. For some history, its name in Old English is brushk meaning tough. Even the Vikings called it cartilage or just plain gristle.

Don’t let that put you off. Prepared right and given time it’s highly rewarding for you and your guests at a barbecue. Smoking a brisket can certainly take a while but it is worth it.

You should know what a good brisket looks like. You should be confident that you know the basics about this specific cut. However, do you know what part of a cow a brisket comes from?

What Part Of The Cow Is Brisket From?

Brisket deserves a low and slow smoke and there are specific reasons. These reasons largely relate to the part of the cow it comes from. That’s because it’s a cut of beef that comes from the breast or lower chest of the cow, directly above the front leg. Brisket usually comes from cows who are aged two years and above.

Another defining feature is that it’s usually cut across the grain. Though it’s a tougher cut than most, that’s essentially why it’s cooked slowly. Two overlapping muscles form a full brisket, those are the superficial and deep pectorals. The brisket can be found on the front half of a cow, usually below the chuck and above part of the shank.

The brisket is one of the first and main cuts that gets separated from the beef carcass. It’s one of eight primal beef cuts (the others being ribs, loin, round, flank, plate, shank, and chuck).

Specifically, the brisket forms a triangular cut including those two overlapping muscles. The pectoral is arguably the more important of the two muscles as it does more work. This muscle gives the brisket its tight cognitive tissue from all the hard work it does.

At the front of the cow, the pectoral muscle is the one that the cow uses to get up, walk and even run. As cows don’t have collarbones, the pectoral must partly support the entire cow. As an average cow can weigh close to 1,400 pounds, that’s a lot of heavy lifting. Supporting such a considerable weight requires dense, tough muscle.

You should notice that the brisket has a lot of connective tissue. That’s a sign that the overlapping muscles support almost two-thirds of the cow’s body weight.

Cooking the brisket low and slow helps break down that connective tissue. That’s also why brisket would be awful for slicing as you would a steak. However, it is great for cooking low and slow making it ideal for smoking.

What Are The Names For Parts Of The Brisket?

The thicker part of a brisket is known as the ‘point’. This is often where more fat marbling occurs, often lending it the name ‘fatty brisket’. That marbling also gives the meat more flavor which is great when shredded for sandwiches.

Especially when all that fat soaks into the bread. If you know your brisket you will likely crave those delicious burnt ends. Those usually come from the fatty point. When the meat is ground, this is also the part of the brisket that’s usually made into hamburgers.

The other, thinner, and more rectangular-looking part of the brisket is known as the flat. This is less fatty and tends to be called ‘lean’ when found in restaurants. The flat is taken from the part of the brisket that is located against the cow’s ribs.

This is the interior portion and the flat is also characterised by the cap. You may trim away this layer of fat when preparing your brisket for smoking. However, you should keep some of it as the fat will render down and keep the brisket moist.

At a minimum, a quarter-inch of fat should be enough to keep the brisket flavorful during smoking once it begins rendering. The flat is also easier to cut and slice which is important to know after resting.

Why Is Brisket Great For Smoking?

A brisket needs to be treated with some patience as it can be smoked for hours without becoming dry. Though a brisket can be cooked hot and fast, doing it incorrectly usually results in tough and stringy meat.

A slow increase in temperature helps tenderize the connective tissue. The wood smoke actively gets into the brisket and breaks it down while imbuing it with delicious flavor.

What To Look Out For When Buying A Brisket?

The appearance of a brisket can be telling for how it’ll perform when smoked. Color is a giveaway and the meat should be a deep, intense red. There should be fat on it and you can trim it to your own preferences. Do remember that a layer of fat will be rendered down over time.

The flat of the brisket should be thick and uniform, a thin one is harder to cook and still retain its moisture. Ideally, the flat should be an inch thick wherever it is the thinnest. Consider the texture of the brisket too. The floppier the better as this will usually cook better.

Finally, look at the shape of the brisket as a whole. A thicker and narrower brisket is usually preferable to a flat and wide one. Thicker brisket may take longer to cook but it should keep its tenderness easier.

Understanding your brisket helps you know how to treat it properly. While you need to know what a good brisket looks like there are techniques to learn too. Trimming your brisket and getting the right amount of fat is crucial.

Knowing what part of the cow is brisket helps you understand what it’s made up of. The cut originates from the lower chest or breast of the cow. As one of eight prime beef cuts, it’s a triangular cut that includes two overlapping muscles. Those two muscles are the superficial and deep pectorals.

These two muscles help support close to two-thirds of the cow’s entire body weight so there’s a lot of connective tissue.

If you imagine a cow getting up, it’ll use its legs to push up and these two overlapping muscles to physically get up off the ground. All that hard work goes into forming a brisket so treat it well and know where it comes from. 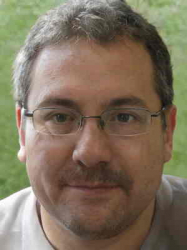 Mick Rogers
Hi, my name is Mick Rogers, and I love cooking. During the summer months, there really is nothing better than good BBQ food, and hosting parties in my yard is one of my favorite things to do. Once I decided to purchase both a BBQ and a smoker, I never looked back.

Food tastes incredible when cooked on a BBQ or in a smoker, and there is no taste that can match it. I decided to extend my love for cooking to my site, Black Bark BBQ, to share the tips and tricks I have learned along the way with others.